New Mayor of the County of Cork

Cllr Danny Collins, an Independent Councillor for the West Cork Electoral area, has been elected the Mayor of the County of Cork. Cllr Collins was nominated by Cllr Declan Hurley, and seconded by Cllr Seamus McGrath. 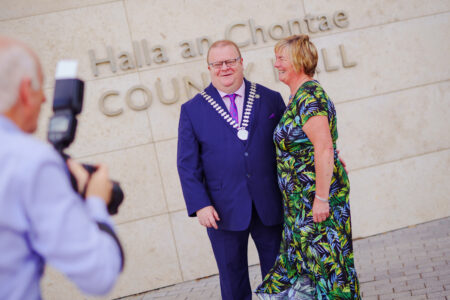 The new Mayor of the County of Cork, Cllr Danny Collins with his partner Noreen Coakley pictured at the Annual Meeting of Cork County Council where Mayor Collins was unanimously elected.

Mayor Collins topped the poll in the Bantry Electoral Area in the 2019 elections, having been co-opted to Cork County Council in March 2016 following the election of his brother Micheal to Dáil Éireann.

Raised in Lowertown Schull, Mayor Collins studied catering and hospitality at the Regional Technical College (now MTU), and initially worked at several businesses in Cork and England. In 1998, he leased his first business in Bantry before purchasing the Boston Bar where he still trades today.

Active across a wide range of community voluntary organisations, Mayor Collins credits his late mother for inspiring him to help others, saying “My mother Patricia passed away in 1993 when I was just 16 years of age. She was a keen helper and committed member in different voluntary organisations, which inspired me to follow in her footsteps. I look forward to using my time in office to support as many people as I can, in particular those who give their time for free to the benefit of the entire community.”

Mayor Collins lives in Bantry with his partner Noreen Coakley with strong links to the town and the West Cork where supporting local enterprise was always an active ethos. His father, Seamus, worked for the nearby Drinagh Co-Op for 48 years, never missing a day of work. Mayor Collins highlighted how keen he is to continue to showcase how Cork County has earned its title of the food capital of Ireland, “Upon retirement, my father travelled across the county with his grandchildren and always spoke of the unbeatable artisan food offering made from local suppliers that is available in our beautiful county. We have an amazing asset in this sector and I am keen to show what my father always said, that Cork is the best place in the world.”

The new Mayor of the County of Cork said he is proud of his record on the Council since joining in 2016. “Local government can make a real difference in the lives of ordinary people. I have been proud to work on local projects such as the new Pontoon in Schull, the flood relief scheme for Bantry, and the footpath from Glengarriff Village to the Nature Reserve. I look forward to leading the Council at this important time for Cork County, as we support businesses and celebrate the community links that have proven so important in the past two years.”

Mayor Collins also highlighted how he was acutely aware of the current economic difficulties being experienced by families and businesses, “The rising costs of food, electricity and fuel are making it more and more difficult for everyone and I would like the people of Cork to know that I will do everything I can to ensure a spotlight is kept shining on providing as many supports as possible to assist those most in need.”

Cllr Deirdre O’Brien of Fianna Fail, a member of the Fermoy Electoral area, was been elected as the Deputy Mayor of the County of Cork.