Cork’s Everton AFC has been recognised as the latest winners of the Cork International Hotel Community Spirit Award.

The amateur football club based in Togher, Cork City, has grown from strength to strength since its establishment over 60 years ago. It began in 1958 with one junior team. Today it holds one of the largest club memberships in the country with a senior team, two junior teams, an over 35 side, three youth teams plus a schoolboy section with teams from Under 7 upwards.

The amateur football club based in Togher, Cork City Everton AFC have a great brandname!, but should not be confused with the other Everton in England which is – of course – a Liverpool based professional club that competes in the Premier League.

The Cork Everton club has made huge efforts to engage with Ukrainian children who have arrived in Cork in recent weeks welcoming boys and girls aged from 6 to 12 years of age to its teams.

Everton AFC became only the second club nationally to receive the prestigious FAI, One Star Club Mark award. The FAI Club Mark is an award given based on the best practice in management, operations and administration of a club when off the field.

General manager of the Cork International Hotel, Eoghan Murphy, said, “Looking at the growing number of people joining Everton AFC, it is obvious the amount of hard work and dedication that has gone into this club throughout over the years. The volunteers have worked tirelessly both on and off the pitch to help each member of the club improve their skills and have fun. It is wonderful to see that around a dozen children from the Ukraine have joined the club in recent weeks too. It is a fantastic way for them to interact with other kids and get involved in the local community. Everton AFC is a very deserving winner of this month’s Community Spirit Award, and I have no doubt that as a grassroots club, it will continue to grow in the coming years.”

The volunteers within Everton AFC have put in hours upon hours of hard work each week to keep up the high standards of the club, all while continuing to promote the importance of sport and sportsmanship for all members.

“The dedication, patience, and overall spirit that the volunteers of Everton AFC have put in each week is astounding. They are so deserving of this award and their hard work has certainly paid off. The volunteers have created a haven for members to find a love for football and without the coaches none of it would have been possible. I would like to congratulate the club on winning such an award, and for continuing to instil a love of football not only for their members, but for the public also.” 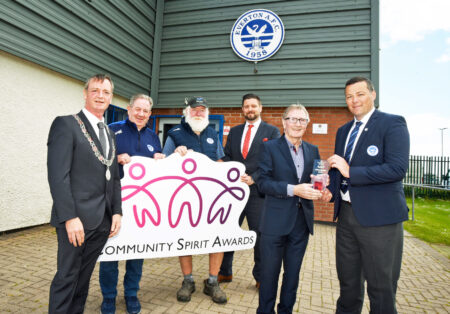