Grant Thornton Ireland recently announced the return of the GT5K Corporate Team Challenge which will take place in person in Dublin, Cork and Galway, along with participants taking part virtually across the country and registering their/their groups time with the national GT5K Leaderboard.

This will be the 11th year of the GT5K series which has grown from a single event in one location to series of 5K races involving over 8,000 participants, covering each province in the country. Three-time Olympian Derval O’Rourke will be race ambassador this year once again, while Irish Rugby Player James Lowe, BBC Journalist Holly Hamilton and Conor Oliver, Connacht Rugby player will join this year’s social squad. 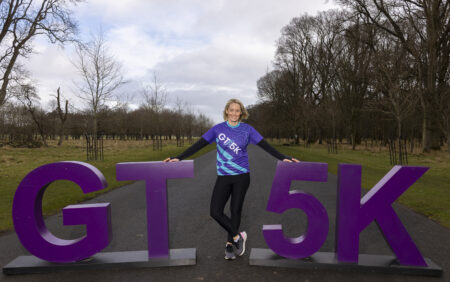 While the race series was held virtually for the past two years due to Covid, it allowed GT5K to expand its international reach and saw runners participating from 23 different countries across the globe, including the UK, US, Cayman Islands, and Australia.

The locations and dates for the 2022 series are; Cork City on Tuesday 6th September 2022, Galway City on Wednesday 14th September, and Dublin Docklands on Tuesday 4th October. Those taking part in other parts of the country from Belfast to Waterford, Mayo to Meath, can complete the 5k race on October 4th alongside those in the physical Dublin race and register their times online.

Building on the success of the recent virtual events, organisers are also delighted to announce that a virtual option will also be available to participants internationally on the 4th October.

Grant Thornton’s GT5K Ireland ambassador Derval O’Rourke was one of the many runners who participated in last year’s virtual run.

Commenting on her involvement in the GT5K, Olympian Derval O’Rourke said:

‘I am delighted to be the national ambassador for the GT5K again this year. It was brilliant to see so many people take part in the virtual run last year, but I look forward to the buzz of seeing people on race night taking part in person, but also delighted to see that the virtual race option is available for participants all over the country.’

Aimed at encouraging social running amongst the business community across the country and indeed internationally via the virtual format, the event welcomes everybody from seasoned runners to complete beginners. Each run can be completed individually or as a team, with four participants on each team. Team members’ times are combined to determine the winner in each category. There are three categories; male, female & mixed.

‘We’re delighted to see the return of the live runs for Grant Thornton’s GT5K series. It’s been brilliant to see the GT5K grow over the years, from a single run in 2012, to a fully-fledged series in many locations around the island of Ireland just over a decade later.

‘It’s fantastic to have the support of the business community year-on-year, with more and more signing up and enjoying the healthy competition. This year we hope to build on the series’ success both nationally and internationally. With the GT5K 2021, we had 23 countries from the global Grant Thornton network participate, and will be welcoming them back again to join us virtually for the flagship run in October.

‘We look forward to GT5K 2022 being our biggest race series ever, which will help raise funds for the Red Cross and the brilliant work they do globally.’

‘We are very pleased to see a return of the Grant Thornton GT5K races. Grant Thornton’s sponsorship of this event allows for it to support The Red Cross as well as supporting our Junior High-Performance Athletics programmes. These programmes provide support and expertise to close to 100 of our emerging young athletes to help them fulfil their potential.’

The Irish Red Cross is the preferred charity partner for the GT5K race series in all locations globally and Grant Thornton Ireland as well as Athletics Ireland are delighted to supporting them with their inspiring humanitarian efforts around the world.

All of the GT5K events are chip timed, with each participant receiving a technical t-shirt and virtual goody bag. For registration and more information visit https://www.grantthornton.ie/gt5k/