Cannonball heads to Cork on Fermoy Motorway, then Kinsale

The official route for Cannonball 2022 has been announced and it is confirmed that the supercar spectacle is coming back to Cork on Friday September 9th. Cork based charity, the HOPE Foundation, is the chosen charity for Cannonball again for 2022. The event has already raised €1,298,779 for Irish charities and organisers are hoping to reach €250,000 for HOPE by the end of September 2022. The rare super cars will take the first pitstop of the event at 12.30pm at Circle K Fermoy and the gleaming convoy will then make their way to Kinsale for lunch. Spectators in Cork at both of these locations will get up close and personal with 200 of the finest cars on the planet and enjoy the unique festival atmosphere that Cannonball is renowned for.

Cannonball, the action-packed supercar spectacle, is set to roll on September 9th-11th with proceeds to The HOPE Foundation. Cannonball, fuelled by milesPLUS from Circle K, is the largest organised road trip in Europe and this year the event will have the highest ever number of car entries including Lamborghini, Ferrari, McLaren, Aston Martin Porsche, Rolls Royce Bentley and Maserati. 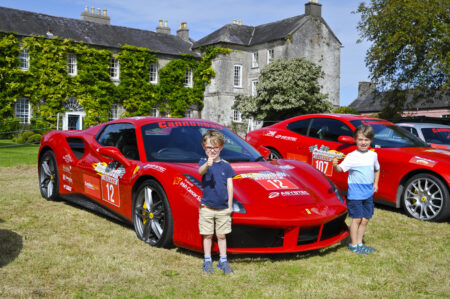 The HOPE Foundation, has been announced for 2022 and the Supercars will take pitstops once again at Circle K Fermoy at 12.30 on Friday September 9th and then take a lunch stop in Kinsale from 2pm Photo taken by Kasia Farat 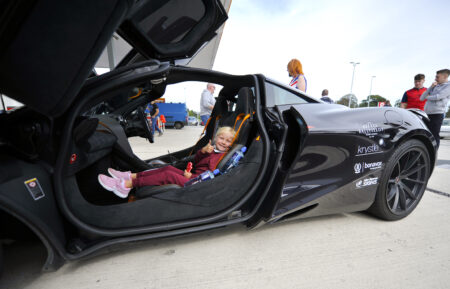 Laoise from Fermoy pictured as the Cannonball supercar event roared into Circle K Fermoy in 2019. The Official route for largest ever Cannonball has been announced for 2022 and the Supercars will take a pitstop once again at Circle K Fermoy at 12.30 on Friday September 9th Photo taken by Kasia Farat

On Friday September 9th, Cannonball will blaze a trail from Malahide in Co. Dublin to Co. Cork with a fuel stop in Circle K Fermoy and lunch in The Blue Haven Kinsale in Co Cork. The first finish line overnight stay will be at the Brehon Hotel in Killarney in Co Kerry. On Saturday September 10th the convoy will leave Killarney and take a fuel stop at Circle K Ballysimon. and then lunch at Salthill Co Galway and onwards to Sligo town for the second finish line and overnight stay. On Sunday September 11th the start line will be at Rosses Point Sligo and then lunch at Kilronan Castle in Ballyfarnon with a fuel up at Casey’s Circle K in Co Roscommon before a big dramatic final finish line in Trim Co Meath on Sunday September 11th at 6pm.

The event has already raised €1,298,779 for Irish charities and, this year, the official charity of Cannonball will be The HOPE Foundation, an Irish Charity doing incredible work with the street children of Kolkata (formerly Calcutta) in India. HOPE funds and operates over 60 projects including 11 child protection homes, a hospital, an ambulance, counselling, food and nutrition, education, healthcare and the restoration of childhoods to children. See https://www.hopefoundation.ie/cannonball/

The Brazilian Dancers will bring all the glamour of carnival and live DJs, bands and festivals in host towns get the party started. The notorious NYPD, German Polizei, Cannonballers and celebrities in crazy costumes add to the melee. From Spiderman to Star Wars, Cat Woman to Wonder Woman, cheerleaders to Charlie’s Angels, Batman, the Joker and more, it is a totally unique free family day out. This year, organisers are also calling on spectators to dress up in fancy dress with prizes for best dressed.

Cannonball was founded by Kildare businessman Alan Bannon and the benefit to the host towns for this event is estimated at €2,567,000 per year. Cannonball is fuelled by milesPLUS from Circle K as the main headline Sponsor for 2022. The Tour Sponsors this year is Apache Pizza and Cannonball official partners include Manhattan Popcorn, Bonavox, Karl Goodwin Motors, AB Signs, and BMW Ireland See cannonball.ie

Rentokil issues warning for flies this summer for Irish homes
Previous Post
What sectors are the largest in football sponsorships?
Next Post
Tweets by @TheCork_ie