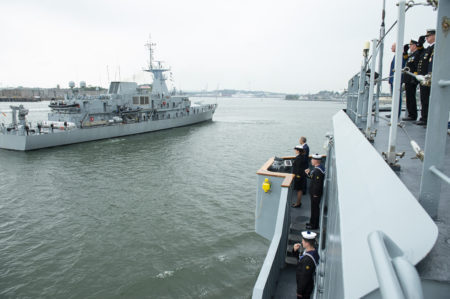 Recent file photo from Sept, showing 2 ships: Ireland’s Naval Service has suffered from difficulty of recruiting new members, and an exodus of existing members, due to a reported poor work life balance and low pay.

Carrigaline based Simon Coveney, T.D., Minister for Defence and Foreign Affairs has welcomed the extension of the Naval Personnel Sea Going Tax Credit in the Finance Bill 2022, which was published today by Mr. Paschal Donohoe, T.D., Minister for Finance.

Minister Coveney stated “I welcome the extension of the tax credit. This is one of a number of measures taken by Government to reward members of the naval service who undertake sea-going duties”. The Minister continued “this positive measure follows on from the extension and expansion of the Naval Service Sea-Going Commitment Scheme, which I announced in July ”.

The Minister closed by saying: “We are continuing to see substantial improvements in the pay and conditions of members of the Defence Forces. I recently secured increases in the starting pay rates for Private 3 Stars/Able Seamen in their first three years of service with pay rates (including Military Service Allowance) starting at €34,798 in Year 1, €36,128 in Year 2, and €37,353 in Year 3 of service. In addition, following ratification by the Permanent Defence Force Representative Associations, of the extension to Building Momentum, the pay and allowances of members of the Permanent Defence Force will increase by some 6.5% over 2022 and 2023”.