The winner of the Paddy Fitzgerald Award for 2022 is Neilie O’Leary from Inchinagown, Coomhola in Bantry, Co Cork.

Nominated by the West Cork County Executive, he has been involved in IFA for nearly 50 years. He sits on the National Hill Committee, which he chaired in the mid-2000s.

Neilie O’Leary is also involved in numerous community initiatives in the Borbin valley area. He said it was a huge honour to win the award and he dedicated it to his family and his community.

IFA President Tim Cullinan said the Paddy Fitzgerald Awards represent the spirit of volunteerism & the selfless dedication of people to the betterment of their communities.

“Each of the nine nominees had the honour of being chosen by their County Executive. The cornerstone of IFA’s work is the willingness of farmers to give of their time in representing their fellow farmers. It is only fitting that this should be recognised and I would like to thank FBD for their support for this prestigious event”.

FBD Trust Chairman Michael Berkery said, “The late Paddy Fitzgerald worked unselfishly to better the lives of farmers, first through his work with Macra in Co Limerick and then in the NFA and Cork Marts IMP”.

FBD Chairman Liam Herlihy said FBD Insurance values the community role played by Paddy Fitzgerald and his achievements for farmers the length and breadth of the country.

IFA National Treasurer and Returning Officer Martin Stapleton, who is the Chairman of the Trustees, said the Paddy Fitzgerald Awards were an opportunity to celebrate those who put themselves forward on behalf of their neighbours and their communities.

EU Commissioner Mairead McGuinness was the guest of honour at the event and she praised the calibre of those who had been put forward. 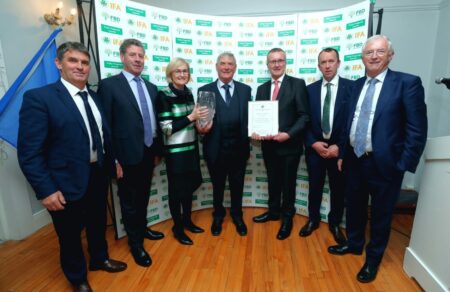