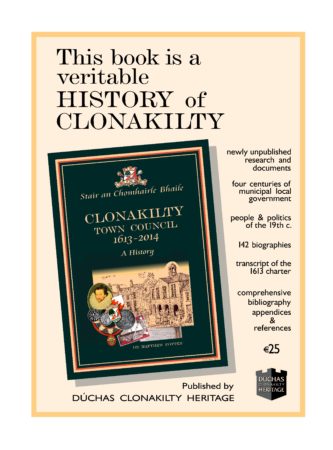 A project which Dúchas Clonakilty Heritage initiated several years ago has, at last, come to fruition with the publication of, “Clonakilty Town Council a History 1613 – 2014’, which is now on sale locally.

This project originated in the Town Council chamber before the council was abolished in 2014 and was organised and driven since by a small sub-group of Dúchas Clonakilty Heritage who engaged the services of Dr Matthew Potter, an authority on local government in Ireland, along with noted local historians and Dúchas members Tomás Tuipéar and Michael O’Mahony.

This is a comprehensive history of the Clonakilty Town Council over four centuries – but also thanks to the years of painstaking research and volunteer work of the two local historians, is also a great record of local people and politics of the 19th century.

It contains no less than 110 biographies of people associated with the council over the 400 years – including many of the Mayors of the past. The book contains some previously unpublished documents, illustrations, photos and research specific to Clonakilty which local people will find very interesting.

It has been already described by one local who has read it as “a veritable history of Clonakilty”.

The publication of the book was also kindly partly sponsored by a number of Clonakilty businesses who had family members associated with Clonakilty Town Council in the past.

With a limited edition of 200 copies printed, people are advised to secure their copy at the earliest opportunity at local Clonakilty outlets: Coughlan’s Bookshop, Rossa Street; Kerr’s Bookshop, Ashe Street and Paddy Meade’s Newsagents, Pearse Street (Next to O’Donovan’s Hotel).

The book is selling for €25

AREA: WEST CORK, ENTERTAINMENT, NEWS
Is It Possible To DOUBLE Your Business’s Website Traffic? Yes, And Here’s How
Previous Post
Parking fines increase from €40 to €80
Next Post
Tweets by @TheCork_ie